COVID-19 Updates: Click here for up to date info.

In Toeing or Out Toeing

You are here: Home » In Toeing or Out Toeing

In toeing or ‘Pigeon Toes’ as they are more commonly called are easy to diagnose. The classical human gait is that of walking with the toes facing forwards or even slightly outwards. In instances where the toe begins to point inward the condition is called as Pigeon Toes and is first seen in early childhood.

The treatment would invariably depend on the cause and Pigeon Toes are usually due to either a curve in the foot, outward rotation of the thigh bone or even an inward rotation of the Tibia. The Tibia is the bone between the knee and the ankle. Although most will correct with time some may require medical treatment like manual manipulation during early childhood, use of special shoes and even surgical intervention in rare cases.

On the contrary Out toeing or ‘toeing – out’, as it is more commonly called is manifested with the toes pointing outwards. This could be attributed to a torsion defect during and after the birth of the baby and usually corrects by the age of six to eight years of age. In rare instances where spontaneous correction does not happen medical intervention may be required and expert chiropodist’s opinion must be sought.

Please contact our office in Brampton at 905-796-6585 for comprehensive assessment and treatment. 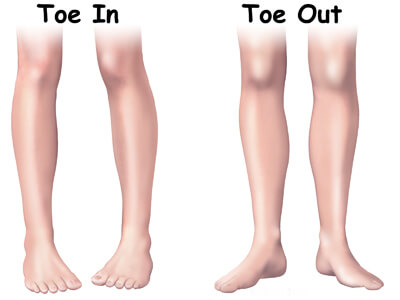 for comprehensive assessment and treatment.

Or fill out this form

The Brampton Foot Clinic has been established since 1990 and proudly providing service to the Brampton region for over 30 years. The clinic is conveniently located in central Brampton close to all major transit routes.